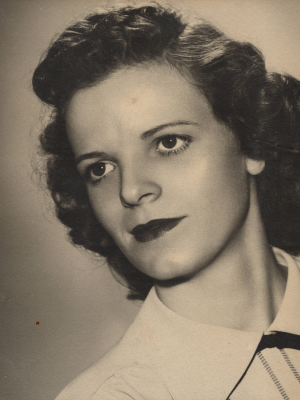 Marion was born in Edmonton, Alberta on August 14th, 1922, the middle child of Robert and Kathleen Cullen (nee Daly), sister to Kathy and Gerald.

Marion moved to Vancouver in her early 20s, where she met and married her husband of 60 years, Murray Zapfe, who grew up in Toronto.  The family moved to Calgary in 1963, where Marion remained until Murray’s passing in 2009.

Marion died as she lived – pragmatic and clear eyed.  She never sweated the small stuff, or much of the big stuff either, accepting life as it unfolded.  In 1975, Marion was instrumental in convincing Murray, her sister Kathy, and brother Gerald, to purchase a home in Palm Springs. This became their cherished winter retreat until 2008, welcoming friends and family, to share the beauty and warmth of the desert.

While in Calgary, Marion, Murray and Kathy became involved with the Stanley Park Lawn Bowling Club.  They spent many years enjoying the company of their lawn bowling friends, volunteering on the executive, and traveling to numerous tournaments across Alberta and BC.  They continued their passion for lawn bowling at the Joslin Seniors Center in Palm Desert, during their winters in Palm Springs.

After Murray’s death in 2009, Marion chose to move to Surrey, and spent 12 wonderful years at Whitecliff Retirement Residence.  She was very active socially, playing bridge and cribbage, as well as countless games of giant crossword, word-in-word and bingo.  Marion enjoyed many outings on the bus, and volunteered for many years on Whitecliff’s Resident’s Council.

Marion passed away at Melville Hospice Home, in Surrey, BC on Thursday, October 28th, 2021, in her 100th year.  Marion was predeceased by her husband, Murray, in 2009, brother Gerald in 2009, sister Kathy in 2016, and tragically, her granddaughter, Jacquie, beloved wife of Chris Chekerda, in 2020.

The family would like to express heartfelt thanks to all the staff at Melville Hospice Home, for the wonderful care Marion received on her end of life journey.

Marion has been cremated, and there will be a family remembrance at a later date.