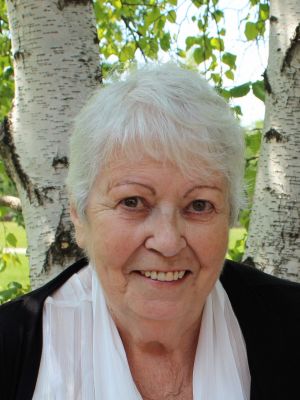 Marilyn was born in Cabri, Saskatchewan to Lloyd and Ada Bovee on November 3, 1942.  She was baptized at a United Church in Cabri and confirmed at a Lutheran Church in Winnipeg.  After high school, Marilyn went to Business College.  When she graduated, she had a job at an insurance company and then was hired by the R.C.M.P Depot Division in Regina as a clerk typist.  On May 22, 1971, she married Willard Schoenroth at Trinity Lutheran Church in Regina.  They moved to Winnipeg in 1971 so her husband could attend Law School.  She transferred from the R.C.M.P. in Regina to Winnipeg to continue her work as a clerk typist for them.  She retired from the R.C.M.P. in 1975 to devote herself fulltime to her growing family and took on what would become her favourite role, a homemaker and mom to 3 children.  Once her husband retired from his law firm in 2001, they relocated to Abbotsford and enjoyed their retirement.

Marilyn was survived by her children Kevin (Lia), Susanne and Kurt (Nicole).  She is survived by her 5 beautiful grandchildren Alexis, Erik, Ava, Sophie, and Hannah.  She is also survived by her stepchildren Glenn (Glenda), Jerald (Tanya), many nieces and nephews, her sister Judy (Bryan), and brother Doug (Donna).

At 6:00 pm on Friday, December 17, 2021, Jesus called Marilyn to His eternal home from the Palliative Complex Care Unit at Abbotsford Hospital.  She was incredibly strong and courageous while trying to fight sarcoma cancer, the same cancer that took her husband, Willard, 3 years earlier.  Marilyn will be endlessly missed by her family and friends.

The family wishes to say a special thank you to BC Cancer at Surrey Memorial Hospital, to the PCCU at Abbotsford Regional Hospital and to the Palliative Care Home Health team in FHA (Abbotsford) for looking after our mom with such compassion and grace over these last 4 months.

In lieu of flowers memorial donations may be made to the Canadian Cancer Society.

A FUNERAL SERVICE will be held for Marilyn at Good Shepherd Lutheran Church, 3825 Hillsdale Street, Regina SK, on Friday, January 7, 2022 at 11:00 am with an internment following at Riverside Memorial Park Cemetery.