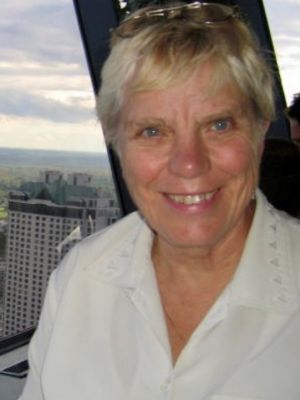 It is with great sadness that we announce the passing of Joyce Thomas. Joyce passed away peacefully in her home on August 17th, 2021 surrounded by family.

Joyce was born July 1st in Shoal Lake, Manitoba to JP and Jean Sigvaldason. She was later raised by her mother and stepfather, Frank Murphy, whom she loved dearly.

From the time she was a little girl, Joyce dreamed of becoming a physician, however for a woman in the late 50’s, this was a near impossibility. Her father, an influential man, could have “pulled some strings” because of his high social status in order to get her into medicine, but she wouldn’t have it. She chose instead to go into nursing and graduated from Winnipeg General achieving the highest marks in the province in 1961.

By 1965, Joyce had pursued another passion, and had successfully received her private pilot’s licence. She would go on to marry commercial pilot, Mike Thomas. The two of them met and fell in love when the airplane she was flying made an emergency landing in a canola field, and he was sent to retrieve her. After a whirlwind romance, they were married only months later, and remained married for 33 years until Mike’s untimely death. Together they had three children; Frank, Isabella, and Leona. The family spent their early years in the NWT, purchasing the Hudson’s Bay store in Snowdrift (Lutselk’e). Mike was a bush pilot and Joyce continued to nurse in the small settlement as well as operate the store.

By 1975 the family had settled in Alberta and Joyce returned to University completing her baccalaureate in Education. After years of teaching junior high and high school English, working as a Public Health Nurse, and as a Staff Nurse in rural Alberta, Joyce returned to the city. There she specialised and nursed in the Intensive Care Unit at Charles Camsell hospital, as well as the Remand Centre in Edmonton.

At age 50 (not only had Joyce taken up downhill skiing) Joyce’s selfless and compassionate nature led her to pursue her Master’s degree in psychology. As a Chartered Psychologist, Joyce chose to go into private practice, with a focus on counselling for Indigenous women and children. This led Joyce back to the North where she travelled by airplane twice a week from Edmonton to provide counselling services. Joyce’s children had left home by then, so Joyce opened her home to children at risk, caring for numerous foster kids, continually advocating for them and for the importance of keeping siblings together.

By the early 2000’s, Joyce had moved out of private practice and began work as a psychologist with the YWCA, an organisation whose empowerment and advocacy for the rights of women had always carried a particular importance to Joyce. Working mainly with victims of violence, Joyce also volunteered her time during this period, taking calls on the crisis intervention and suicide prevention line.

Although Joyce was nearing retirement, she was not ready to walk away from her first love of nursing just yet. Joyce finished off her career teaching nursing students at Norquest college in Edmonton. She took students into varied hospital settings and was not only able bring her knowledge and expertise to students embarking on a career in nursing, but she was able to do this side by side as colleagues with her daughter, whom Joyce had also inspired to become an RN.

After retirement, Joyce could be found bicycling for miles and miles around Edmonton, along with enjoying her newest venture, square dancing. While square dancing Joyce met her second husband, Francis. The two of them were married in 2008, and spent time dancing, gardening, travelling (with their Dachshund, Datsy), and spending time with friends and family. A highlight for her was being able to attend her nursing reunion on Gabriola Island together with him. Francis passed away in 2011, ending a truncated but love-filled marriage.

Joyce eventually retired to the West Coast and enjoyed her time in White Rock, BC, by daily visits to the beach where she would read for hours until the sunset left her no light to read by, stopping for a McDonald’s ice cream cone on the way home. She attended White Rock Baptist Church and enjoyed her Bible studies and music concerts every week. She also volunteered her time at Kent Street preparing meals for seniors.

Although Joyce had many academic and professional successes, her greatest attribute was her ability to truly see people. Never did she walk by someone without considering what they might be feeling or experiencing. She was selfless and humble to a fault, as she gave so much to people and never asked for anything in return. She worked hard and lived frugally in order to provide for her family and support various charities and foundations. She will be missed every day by her loved ones, but the example of how she lived inspires the actions of all she loved and all who love her.

Her enthusiasm and joy for life were exemplified in her adventuresome nature. She was constantly outdoors, horseback riding, golfing, riding her bike, or road-tripping in her Roadtrek across Canada and the US. Though she claimed she never had a sense of humour (her words!), she was never short of quick wit for every scenario, making everyone laugh, and bursting into laughter herself with a contagious laugh.

She leaves behind her three children; Frank (Irene), Isabella, and Leona, eight grandchildren; Justin, Cassidy, Spencer, Kaitlyn, Jessica, Sarah, Victoria, and Jackson, as well as great grandson Atlas, and beloved dog Jazzbo to mourn her. Also very dear to Joyce is her cousin; Leona (and family), her niece; Karen (Norm) and daughters, Maya and Megan, her nephew; John, and sister-in-law Mae.

Her loved ones find peace in the knowledge of Joyce’s faith and trust in Jesus, in whose loving arms she now rests. She has now returned home to Him, and we look forward to being reunited with her.

In lieu of flowers, Joyce would be best honoured and remembered by donating to pressing and immediate causes, as she was always informed and conscious of current events. Joyce looked forward to volunteering with and supporting the Canadian Red Cross, and donations to them would be appreciated and uplifting to the memory of her heart for those in need.