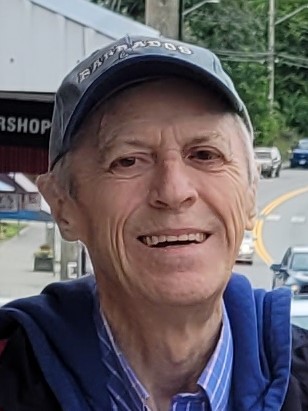 Arthur William Franson, loving husband, brother, and uncle, passed away peacefully at Chilliwack Hospital at the age of 78, after enduring many years of failing health with quiet, uncomplaining strength.

Art was born in Vancouver, BC, to John and Christina (Crawford) Franson.  His early childhood years were spent in Squamish, BC, until his family moved to Lillooet.  After his mother’s death, his father remarried and Art became a member of a loving extended family. He was able to skip out of several classes in his senior high school years as an on-call maintenance man at the local hospital, where he honed his skills as a handyman able to fix almost anything. It was here in Lillooet that he acquired his life-long love for fishing and exploring the wilderness. After graduation and a stint as a PGE brakeman, he attended Radio College at the Vancouver Vocational Institute, where in 1965 he got his radio license and a job on an Italian freighter, enabling him to explore Morocco, Spain, and Italy.   The next adventure, as a deep-sea radio operator, came on the Clifford J. Rogers, built in Vancouver in 1955 for Yukon White Pass Railways and claimed by them to be the first purpose built container ship, hauling lumber between Guayaquil, Ecuador, and Tumaco, Columbia. Next, several weeks on the Canadian weather ship cured Art of his wanderlust and he joined the Canadian Coast Guard and took jobs at Alert Bay and Prince Rupert with the Federal Marine Air Radio, giving him a vast knowledge of the islands in the Inside Passage.  He later worked at the Williams Lake Airport before becoming Station Manager at the Alert Bay Radio Station from 1977 to 1983, until his health forced him to  shift to Vancouver Radio. He married his long-time sweetheart, Ernestine Pritchard, in 1989 and retired in Hope, where he was able to be closer to the family he loved so much.

After retirement, Art continued his love of boating and fishing. He would never pass up an air or train museum or a boat show and, until his health failed him, spent many a happy hour restoring a cabin cruiser. He was a loyal Valley Power and Sail Squadron member.  He also took great pleasure in operating his shortwave radio, exploring back country roads, and travelling to the Caribbean, Mexico, Europe, and the States.  A gentle and quiet man, Art would nevertheless never need much urging to tell a story or two about his adventures at sea or in Alert Bay, a community he dearly loved. He always enjoyed sharing memories of working with the Coast Guard with his good friend Randall.

Art was predeceased by his father, mother, sister May, stepbrother Tom, and one nephew. He is survived by his wife Ernestine, his stepsisters Barbara (George) and Carol (Jack), several nieces and nephews, and two cousins in Sweden.

Many thanks to the medical community in Hope for giving Art such excellent care over the years, especially Drs. Greggain, Schulz, and Darby. Special thanks to the doctors and nurses at Chilliwack Hospital ICU for their expert and compassionate care of Art in his final days.

A celebration of life for family and friends will be held at the Hope Golf Club, from 2 to 5, on Sunday, September 4th. Flowers gratefully declined.  If you like, you may offer a donation in Art’s name to Diabetes Canada, or a charity of your choice.