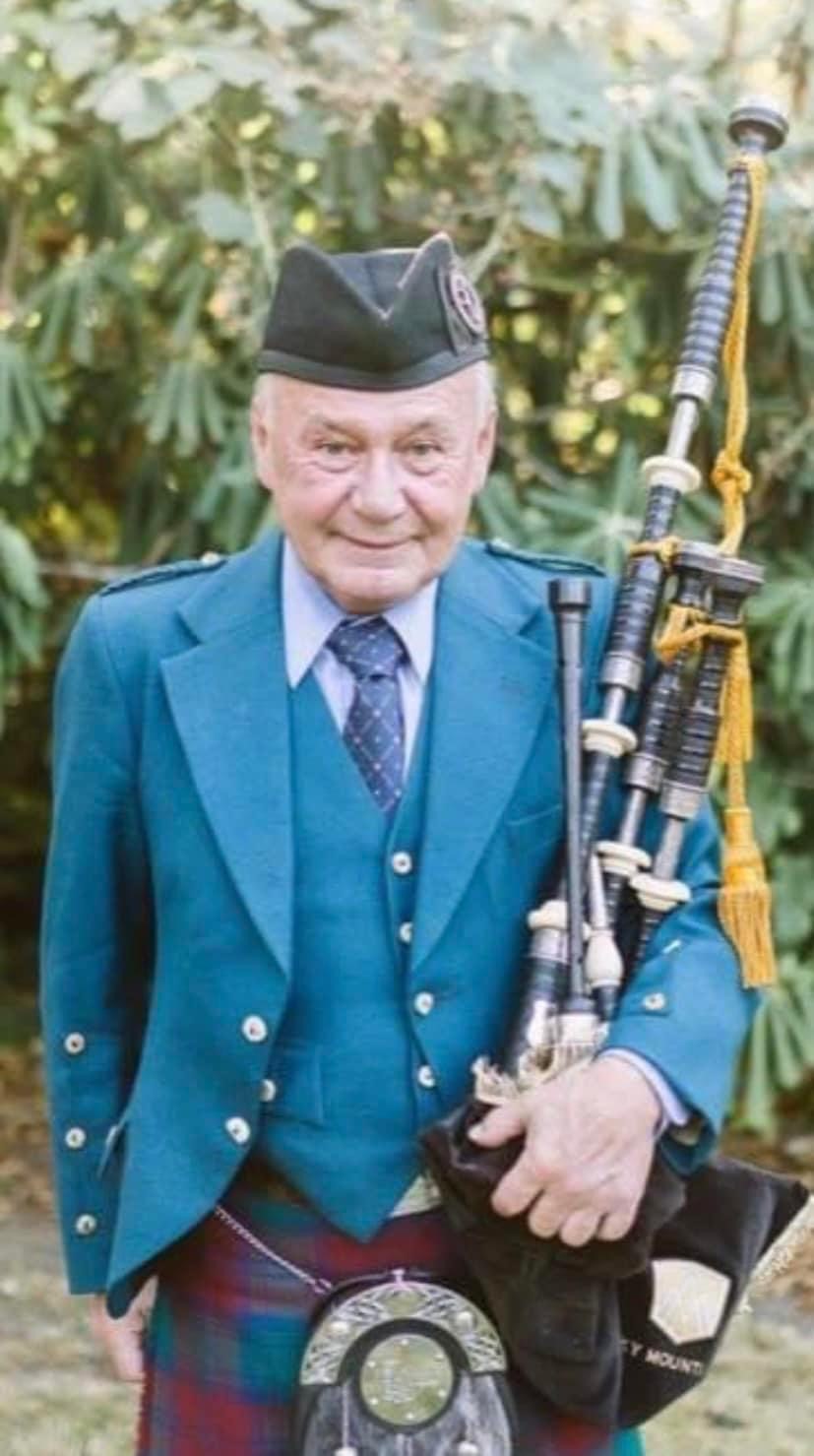 It is with great sadness to announce the passing of Alan James Walters at his home in Surrey BC on July 10th, 2022.

Alan’s competitiveness and great determination started at an early age. He started on skates at the age of two and by the time he was six years old he was playing hockey in tournaments in the community. At seven years of age Alan was introduced to a chanter. With his amazing dedication he graduated to Highland bagpipes and played in the North Hill Lions Club Pipe Band. Alan then went on to compete and play with many bands. At 18 years of age, Alan competed at the Coeur D’Alene Piping School playing his best solo piobaireachd composition and won a trip to Scotland. It was supposed to be a two-week trip, but Alan stayed for several years. In Scotland, Alan joined Muirhead & Sons Pipe Band and during that time they won the World Pipe Band Championship. Alan was also fortunate enough to take lessons from Pipe Major Bob Hardie and Pipe Major Donald McLeod, who were both world class pipers. Alan was fortunate to meet Dougie Ferguson who invited Alan to stay with their family. This resulted in many lessons and hours of practice time together. Alan’s goal in life was to work hard but always have fun doing it. Always the life of the party and a jokester with a lesson or bagpipe tune up his sleeve.

Alan’s talents were many and he had many friends in his life. He was a well-known piper, a mentor, a band leader, a judge, a teacher, composer, and piobaireachd expert. He piped for many dancers over the years and produced a few records and CDs including Full Shilling (1990), Strictly Time (1996), White Spot Junior Pipe Band (2005), Swarm of Drones (2000), and Strictly Time II. In Alan’s free time he enjoyed fishing, golfing, and sharing stories about his adventures. If you were fortunate to know Alan, you will never forget him.

Alan will be sorely missed by his mom Norma, his brother Bob Walters (Linda) and their daughters, Jacquelyn Walters (Jameel), Christine Spady (Kyle), and Lindsey Morris (Steve), his sister Vicki Wren and her children, Branden, Tyler, Ashley. He is also survived by his aunt, Sherry Kathol (Conrad) of Calgary, as well as various cousins, nieces, and nephews. Alan was predeceased by his father, Ronald Walters, his grandparents, Irene and Sidney Walters, and Agnes and Tilly Wadsworth.

Rest in peace Alan you touched and influenced many people, and you will always be remembered for your musical talents, your incredible personality, and your signature laugh.

The family would like to express their thanks to British Columbia Pipers’ Association and all the Highland Pipers, Drummers and Dancers who have shared their own special memories about Alan.

Graveside Service to follow at Burnsland Cemetery in Calgary, Alberta on September 10th, at 2:00 p.m. We invite family, friends, fellow pipers, drummers, and dancers to join us in memory of Alan.

LOT 74, BLOCK 1A, SECTION B (Just passed the Main Entrance on the right)

In loving memory of Alan Walters, the family will be preparing a book of Alan’s music and memories.

Alan taught me and several others to play pipes from 1975 when he was Pipe Major for the Prince George Legion Pipes and Drums. His experience with Muirhead and Sons served us and the Western Canadian piping community well. He built some great pipers, helped many bands, and was a good friend. We quaffed many an ale (stop the van - they serve Guinness!) in several different places, while piping at any hour - day or night! Besides piping, Alan was an avid hunter, and angler, and I hunted ducks and geese with him and Tiadlaoch d’Or for several years. That yellow dog was a gift from the Whyte family for teaching Heather to play pipes. I learned much from him about piping, friendship, and life. He was the right person to start me off, and I much later taught him that rapping the fingers with a chanter was not a great teaching technique! There are many great tales about Alan, and I hope to be there to share some with his other friends. I will miss that laugh, his camaraderie, piping skill - and the only fellow I knew who could drink bag seasoning and claim it was Bailey’s Irish Cream. ;-)

I was heartbroken to hear Alan had passed, I thought he would live forever.
Alan was not just my bagpipe teacher he was my mentor, my friend and most of all a father figure. He taught me so much about life and how to get the most out of it.
When I was lost he was there, when I was struggling he was there.
I am sure Alan changed many others lives but I feel like I lost my Dad.
I am gonna miss Alan